You are here: Home / Blogging / Independence Day: We Are Not Free. Still a long way to go

Happy Independence Day Friends! It has been more than 70 years of freedom for India. It was seventy years ago when we became a self-independent, self-thriving country. We kicked out Britishers and raised our flag proudly in the celebration of our Independence. What happened afterwards? A lot of things happened afterwards. We made our Constitution. We made technological enhancements, social enhancements in the form of schools and universities, provided people with proper education so that they can grow to become a responsible citizen of the country. But then we became lazy, we started taking things for granted and then we started polluting our very own mother India.

Are we really free? 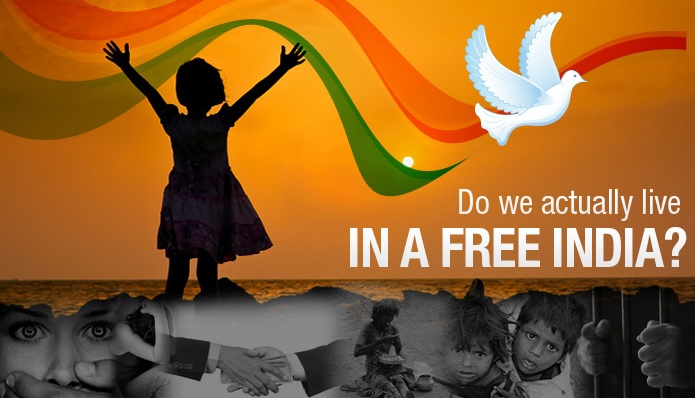 No. We are not free, we are still in the illusion of freedom. Don’t worry I’m not about to give a typical freedom speech here. That is for our PM Narendra Modi. I’m here to open up the minds of all those people who can really take our nations ahead. That is YOU. I’m here to talk about Financial Freedom. If you do not know the meaning of the word Financial Freedom then click on the link and read it. This is something which makes a common man grow up and stand next to the people who take our nations ahead. I believe if you have got the financial freedom then you can actually start working for your nation and not be trapped in this materialistic world run by money.

Who do you think is taking our nation forward? Is it you. If yes then ask yourself again. What is it that you are doing to take India forward. Because, I don’t think you are doing anything that is helping our nation in any big way, I only see a labour working to fill his stomach and feed his family. So, who is taking our nation forward? You all know about them, Ratan Tata, The Ambani’s, Shahrukh Khan, Sachin Tendulkar, Young CEO’s who have started their own quest for freedom. You must know them because they are working for the nation and not just to fill their stomach and feed their families. They are providing job opportunities for the people like you.

Next time when you will say that you are free then think again. Maybe the meaning of freedom in our minds have taken a wrong?demeanour.?

How can we become free again?

Back in 1947, people who were rich and financially free were the one who played the major role in our independence. Financial freedom does not mean that you become a millionaire (although it could be) but it means to become independent of money in this money driven world. Mahatma Gandhi Ji was financially free. Infact, Mahatma Gandhi was a Minimalist. That is a totally different concept that has the potential to make any man great. Chacha Nehru Ji was financially free, infact he was rich and wealthy. Such people can use their mind to think beyond the minds of people who are under the pressure of earning money every day for their survival. If you are having a hard time believing on this concept then read Financial Freedom must be our primary goal.

Every great man first found a way to become financially free first in his head. Can you ever imagine Steve Jobs working in some IT company? God bless that company where Steve Jobs would have worked. He would have made space his own. Financial Freedom is completely dependent on your state of mind. If you start thinking in a free way, you will eventually become free one day.

Resolution on this Independence Day

On this powerful day, let us take an oath, a resolution to bring our nation at the top in terms of education, economy, development, technology and livelihood. Let’s make our mother India happy and pure again. This Independence Day, let us take a resolution to become financially free and help other to achieve the same. If we can do such a simple thing, we can break any barrier of restriction and come out with a force that will have the potential to break any resistance that comes ahead of it.

Let us take a resolution to become truly FREE.

Take the first step by sharing this article with your friends and family and explain the concept of Financial freedom to them. I cannot wait to see the world where everyone will be financially free and working towards a better humanity.